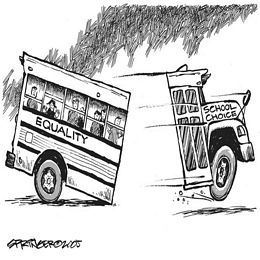 According to numerous studies, American students have fallen behind many other Western democracies in educational achievement since World War II. Where US schoolchildren once achieved high marks in math, science, and reading, they are now closer to average—and in the case of math, below average—when compared to other industrialized nations. This has prompted a concerted effort to reform the American school system in a way that improves basic proficiency across the entire spectrum of core subjects. However, the real-world consequences of school reform have led to new problems and criticisms even as the old problems largely remain. In 2002, President George W. Bush enacted the No Child Left Behind Act in an attempt to improve the quality of education in US public schools. (Opposing Viewpoints)