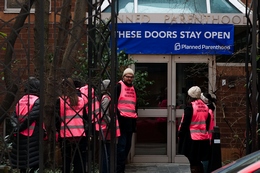 An abortion is a medical or surgical procedure that deliberately ends a pregnancy before an embryo or fetus is born. Opponents of abortion typically object to the practice for religious or ethical reasons, contending that the procedure constitutes the cruel termination of what they consider to be a viable human life. Those who support a woman’s right to choose an abortion argue that access to safe, legal abortions is a human right. In Roe v. Wade (1973), the US Supreme Court ruled that the Constitution protects a woman’s right to an abortion through the end of the first trimester, or the twelfth week of pregnancy. After twelve weeks, a woman’s access to abortion may be restricted based on the discretion of the states, as well as the level of risk that the pregnancy poses to the woman’s health. The issue remains highly controversial. (Opposing Viewpoints)