Provides print and electronic resources on the topic of media violence. 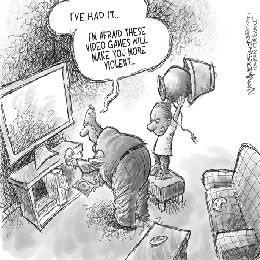 Media violence refers to acts or depictions of violence that are found in the media or mass communications. These could include violent scenes presented in television shows and motion pictures, violent acts recorded and seen in television news, lyrics in popular songs describing and perhaps glorifying acts of violence, and violent activities simulated on electronic computer games. Through these types of media, people can vicariously experience violence without actually being a perpetrator or victim of a violent act. This raises the question of whether “exposure” to media violence is a cause of violence in real life. Many observers are especially concerned on the effects of media violence on children and adolescents. However, efforts to control or restrict violence in the media have also raised questions about censorship and whether government may unduly limit freedom of artistic expression.(Opposing Viewpoints)