Provides print and electronic resources on the topic of LGBTQ rights. 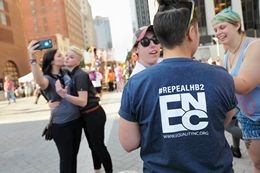 The campaign for equal rights for lesbian, gay, bisexual, transgender, and queer (LGBTQ) people in the United States has seen significant success over the last decades. In 1988, approximately 10 percent of Americans believed that same-sex marriage should be legal. This percentage rose to 35 percent in 2001 and then to 55 percent in 2016. The legal climate has transformed along with popular opinion, and many states legalized gay marriage in the first decade of the twenty-first century. In 2013, the Supreme Court struck down Section 3 of the Defense of Marriage Act, a law enacted in 1996 that defined marriage under federal law as existing between one man and one woman. By 2014, same-sex marriage was legal in 37 states. In June 2015, the Supreme Court struck down state restrictions on same-sex marriage, arguing that the Constitution guaranteed the right to same-sex marriage for individuals in all 50 states and the District of Columbia. (Opposing Viewpoints)