Provides print and electronic resources on the topic of homeschooling. 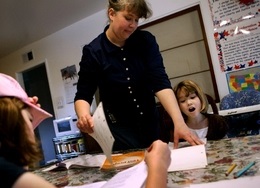 Homeschooling refers to the practice of educating children at home rather than sending them to a public or private school. While children have always obtained at least some of their education at home, growing numbers of parents have chosen to remove their children from formal school systems to be taught at home since the 1960s. According to a 2017 report released by the National Center for Education Statistics (NCES), 3.4 percent of American students ages five through seventeen were homeschooled in 2012. This percentage represents only a small part of the population but marks an increase of over 60 percent since 2003. Obtaining data on homeschooling can be challenging, however, as each state has its own laws regarding parental autonomy and reporting requirements.(Opposing Viewpoints)