Provides print and electronic resources on the topic of hazing. 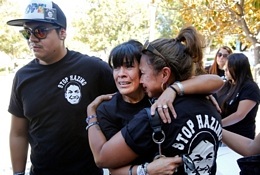 Many groups require prospective members to go through an initiation ritual in order to gain membership. Initiation rituals are often rooted in tradition and serve to demonstrate the prospective member’s commitment to joining the group. For example, individuals joining a Christian church may go through the ritual of baptism. When an initiation ritual involves the humiliation, endangerment, or abuse of the prospective member, the practice is referred to as hazing. Hazing comes in many forms and can result in physical and psychological harm. Violent hazing can include forced alcohol consumption, forced sleep deprivation, physical abuse, sexual assault, and other forms of harassment. More subtle forms of hazing involve verbal abuse, belittling and humiliating prospective members by ignoring them, forcing them to perform menial tasks, or requiring them to wear embarrassing clothing. (Opposing Viewpoints)