Provides print and electronic resources on the topic of genetically modified food (GMOs). 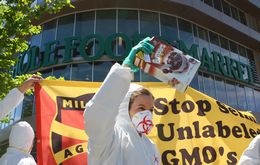 Since the 1930s, several decades after the Austrian monk and scientist Gregor Mendel discovered genes—small heredity units in DNA by which parents pass along traits to their offspring—people have altered crops or animals by crossbreeding. Breeders select a certain trait, such as size or color, and by carefully choosing the parent plants or animals, develop new species of that organism. Tomatoes may be made plumper, grapes seedless, or oranges juicier. However, the process can take a long time. Often many seasons pass before growers achieve desired results.

For animals, these modifications can take even longer. If breeders want a heftier steer, they select parents who are larger and meatier. They mate the parents, wait for the calf to be born, and then wait for the calf to grow old enough to have babies. Then, the breeders mate it with another huge bull or cow and again wait until the resulting calf is mature enough to have babies itself. If breeders are working toward a specific trait, it may take generations of crossbreeding to attain the desired results.