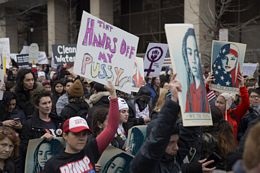 Feminism is a dynamic philosophy and social movement that advocates for human rights and gender equality. While the precise meaning of this term changes from generation to generation and from individual to individual, a commitment to the advancement of women’s rights remains an essential component of feminism. Since French socialist Charles Fourier first coined the term in 1837, the definition of feminism has been in flux, as different social movements have adopted the banner of feminism to meet the goals specific to their time. Similarly, the feminist identity has also evolved to become more inclusive of individuals of different races, sexual orientations, and even genders, with the philosophy that not every woman is a feminist, and not every feminist is a woman.(Opposing Viewpoints)