Provides print and electronic resources on the topic of homelessness. 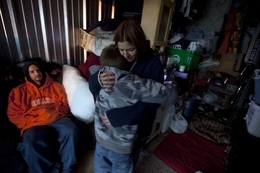 Individuals and families experiencing homelessness lack a permanent place of residence. People faced with homelessness may seek out temporary residence in a public shelter, live in their vehicle, or sleep in public spaces. Others find shelter with friends or family, join homeless camps, or live in motels. As of January 2016, there were an estimated 549,928 people experiencing homelessness in the United States, according to the annual homeless assessment report released by the US Department of Housing and Urban Development. Of this population, about 22 percent were children under age 18, and 14 percent were considered chronically homeless, or individuals who had been homeless for at least one year or a minimum of four times in the past three years.

Numerous factors can lead a person or family to experience homelessness. Economic, social, and political issues, as well as natural disasters, have forced thousands of people to remain without stable housing. In the United States homelessness is often caused by a combination of structural factors, system failures, and individual and relational issues. These components range from generational poverty to a lack of support for migrants and refugees to improper discharge planning for individuals leaving hospitals or correctional facilities. (Opposing Viewpoints)