Provides print and electronic resources on the topic of fracking. 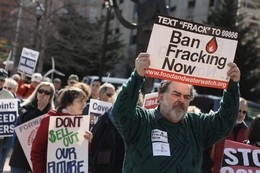 Hydraulic fracturing, commonly known as fracking, is a drilling technique used to extract oil and natural gas that are dispersed within sedimentary rock formations deep beneath the earth’s surface. It typically involves pumping large quantities of high-pressure water mixed with sand and chemicals into the ground to create fractures in the rock and release the fossil fuels trapped inside. Hydraulic fracturing stimulates the flow of oil or natural gas to the surface, where it can be captured, processed, and used as a source of energy. The technique has enabled the oil and gas industry to extract large volumes of fossil fuels from unconventional locations like shale rock, sandstone, or coalbeds, where the oil or natural gas is dispersed in small pockets rather than concentrated in underground reservoirs.