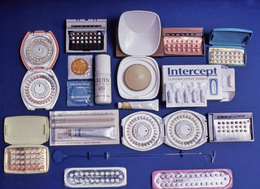 Birth control, also referred to as contraception, encompasses a variety of techniques, devices, and pharmaceuticals designed to intentionally prevent pregnancy before, during, or after sexual intercourse. These barriers stop the release of a female egg from the ovary, block a male sperm from fertilizing an egg, sterilize an egg or sperm so that it cannot reproduce, or inhibit a fertilized egg from attaching to the uterus. The ancient civilizations of Egypt and Greece used contraception in the form of herbal vaginal suppositories and spermicides. Early condoms were made of linen, fish intestines, or sheep bladder. Condoms were mass produced as early as 1860. (Opposing Viewpoints)